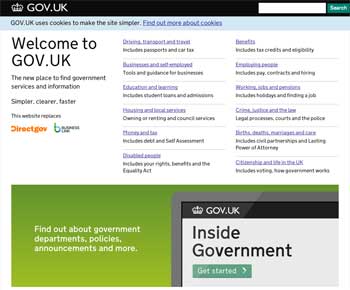 One of the best curators on the Net, particularly of all things agile, is Neil Perkin at the blog Only Dead Fish. I sometimes have to translate the british-isms (We are two nations separated by a common language), but I always find something interesting in his weekly fish food. This week is no exception. Neil led me to a wonderful article by Mike Bracken, the Executive Director of Digital in the Cabinet Office of the UK, responsible for all things digital for the British government.

Mike explains how he created a new version of the main British government website, GOV.UK, by turning the usual process on its head. Rather than starting with government policy, then ensuring that the digital process was consistent with the analog paper process, and continuing with procurement, he started with the users and what they were seeking to get done at the web site. I would call these user stories, or jobs to be done.

Based on this knowledge of the users’ jobs to be done, he then created a minimum viable product (MVP) of the web site, which he could use to gather feedback. This feedback allowed him to quickly iterate until he had something he could call a beta of the web site. The result was delivery in weeks rather than the usual years.

Find the Quick Do

Although this phrase sounds slightly awkward on my American tongue (I might say Find the Quick Win), it is tremendously good advice. What can we do quickly to start getting feedback? This is the heart of the idea of the minimum viable product, and also great advice for Agile Marketing teams.

You already know that I’m a huge fan of iteration. But iterate wildly? I take this to mean two things:

What a wonderful mantra! I’m re-designing a web site right now, and I’ve taped these words up next to my screen. How can I make this web site simpler, clearer and faster for my users?

Mike met with some of his predecessors in the government job to seek out advice. As a group, they were frustrated by their inability to get things done. Here’s the money quote:

As one candidly put it, ‘the strategy was flawless, but I couldn’t get anything done.’

How many of us have faced the same situation when working in bureaucracies or large companies? The solution, as Mike wisely points out, is to start with delivery, not strategy. Stop writing marketing plans and start thinking thoughtfully about what you can deliver next. Find the quick do. Stop implementing big campaigns and start experimenting. Iterate wildly off those experiments. And each step of the way, remind yourself to keep it simpler, clearer, faster.

Take some time to read Mike’s wonderful article and check out Neil’s web site as well. Let me know what you think in the comments.

Agile in the Physical World

Are B2B Marketers Ready for Mobile?