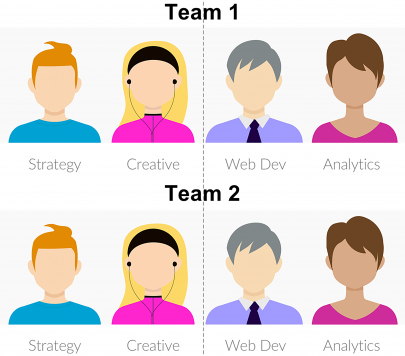 Cross-functional teams are a best practice in Agile software development. Rather than organize by skill-set silos (Writing detailed specifications, writing code, quality assurance) and pass work from one skill-set silo to the next, Agile software developers organize by projects or customer value streams . Rather than pass a project from one skill-set silo to the next, they include people with all of the necessary skills on the team and the team is responsible for the project from beginning to end.

In companies organized by skill-set silos, almost any project requires multiple skill sets and thereby work involving multiple departments.  Each department has a different set of priorities and almost inevitably, certain departments become bottle necks.  Perhaps all web development has to go through the IT department and the typical lead time for any development project is months, if not years. Perhaps creative is continually backed-up, and creative is also frustrated by constantly changing priorities and unreasonable deadlines from the strategy team.  Sound familiar?

The conflicting priorities issue arises primarily when individuals work on or get assigned to multiple projects at the same time. The motivation is to keep everyone busy.  When one project requires the skills of a marketing strategist, for example, the creatives or the web designers work on other projects. This leads to a number of potential and real-world issues.

When the marketing strategist is done with their portion of the work, inevitably the person with the next skill set in the chain (say the creative) isn’t available, as they’re working on something else. This adds a delay.  When the creative does come free, the marketing strategist has to switch back to the first project in order to brief the creative. Context switching adds overhead.  This pattern repeats itself when the creative finishes their concepts or first draft. The project waits for a reviewer to free up, then it goes back to the creative, sometimes in an endless round of review and re-work.

Across the organization, many projects are being worked on at the same time, with each of them taking a little step forward, then waiting, then moving forward or backward depending on the review and the amount of re-work, and they inch along to a distant finish.

Cross-functional teams eliminate most, if not all, of the conflicting priorities.  Everyone on the team has the same priority: the success of the project and the completion of the next iteration of work. Their loyalties are to the project, not to their skill set or their functional manager. If constructed correctly, the cross-functional team has all or most of the skill sets necessary to move the project along without delays.

The marketing strategist doesn’t work in isolation, but leads the marketing strategy thinking, with input (and understanding and buy-in) from everyone else on the team.  As the strategy for the first iteration is finished, it goes right to creative, who has more of the context, and who produces rough sketches of ideas quickly, sharing them with the entire team and getting feedback right away, before they invest a lot of time in ideas that don’t work.

In some cases, people on the team whose primary skill-set is in one area contribute in other phases.  For example, the marketing strategist may get cross-trained to use the asset management tool and may gather some of the necessary product images for the creative.  Or the creative may edit and review the copy written by the copywriter for spelling and grammar.  The team pitches in together to get the work done.

Coordinating projects across multiple departments requires meetings. In many cases, lots of meetings. Documents and processes like creative briefs or development specifications introduce the possibility for miscommunication, with the attendant quality and re-work implications.

Cross-functional teams improve communication and quality.  A web developer, for example, develops a deeper understanding of the project if they’re assigned to it from the beginning. It may seem inefficient to have a web developer or a creative sitting in early meetings where scope, target audience and other important considerations for the project are discussed. But these discussions provide important context, and the time “wasted” before the web developer writes code or the creative starts providing concepts is small, particularly if the team is working in an Agile, iterative fashion rather than a waterfall fashion.

Many cross-functional teams are organized around a particular customer intent, customer action or value stream.  This helps the team keep focus on the customer experience.

For example, I heard a story the other day about someone who had purchased an item online with a 30% discount coupon, and when she got home, she realized that she had the wrong size. She attempted to return the item to the local store of this retailer, who refunded the original payment amount through one system, then charged her full price for the replacement item through a different system, designed for point of sale in their physical locations. The customer was understandably upset that she didn’t receive the 30% discount and that the retailer functioned as if their online and their brick and mortar stores were two different businesses.

Although this failure to coordinate online and retail in-store purchases is becoming less common, it still happens, and mostly it happens because organizations build systems for themselves, rather than for customers.

Cross-functional teams can be organized around the customer experience, and can build experiences (like returns) that cross organizational and system boundaries.

Organizations that seek to achieve agility should improve their ability to iterate quickly.  Rapid iteration leads to esting out assumptions early on, getting direct feedback from customers and delivering value in the marketplace before competitors.

Skill-set silos often find themselves delayed, as one or more skill-sets are not available when they are needed. Cross-functional teams also spend less time in meetings and the people producing the work have the context necessary to understand customer needs and the specific problems being solved.  Everyone on the cross-functional team is vested in making the project work and everyone sees the results of tests with each successive version, rather than being rented out to many different projects, none of which provide enough context or history or focus to ensure their best efforts.

This is one of the biggest and most over-looked benefits of cross-functional teams. Skill-set silo teams often spend many hours in meetings trying to reconcile conflict, each team taking a point of view that often relies heavily on the approach and biases of their formal training. Developers emphasize rigor and specificity and safety, often pushing back on approaches that postpone decisions until more is known and favoring a “right” solution. Creatives often take the opposite approach, delivering a variety of solutions and valuing the new or the different, even as some customers want the familiar. In almost all cases, teams with a full plate of work and tight schedules often have veto power over a project and there is little incentive to work with other teams.

With cross-functional teams, people with valuable skill sets are rewarded not just for exercising their skills, but for the success of the project.  If the schedule seems impossible or they disagree about a particular approach, rather than just throwing up their hands and going on to another project, they must find a way to resolve the conflict so that the project moves forward.

People with different formal training and different skill sets often look at a problem in different ways.  Having multiple skill sets on the team can often lead to innovation in unexpected ways. For example, a developer working on a product whose audience is other developers may provide insight to creatives that wouldn’t otherwise be available if the creative brief was written by the marketing strategy team. Someone who is experienced at testing code and finding underlying assumptions leading to unanticipated outcomes may contribute to the testing of assumptions in a marketing context.  Multiple points of view may lead to unexpected insights.

There is some scientific research that confirms that cross-functional teams are more innovative.  Rajeth Seshi and Daniel C. Smith studied 141 cross-functional product development teams and found innovativeness was positively related to the strength of team-members identification with the team, encouragement to take risk, customer influence and monitoring of the team by senior management.

Cross-Functional Teams Improve Alignment and Use of Resources

The use of cross-functional teams also eliminates the complacency inherent in skill-silo teams where jobs to be done are somewhere deep down on the priority list of a particular group.  This may give a false sense of assignment: this teams own their portion of a project, when in fact it’s so low down on their priority list that no work is getting done on it or will get done in the foreseeable future.

What is a Cross-Functional Team?

A cross-functional team is a team that is organized around a project, a defined portion of a product, a service, or a customer value stream. The team members have all of the different areas of functional expertise necessary to complete the project or deliver the product, service or value stream.

Some companies implement what I would call virtual cross-functional teams where team members continue to report in to their skill-set silos and they work on multiple virtual teams.  In my experience, this is rarely successful. Team members get pulled in multiple directions, they don’t attend all meetings of the team, and their loyalty remains with their skill-set silo.

I recommend that at least the core members of the virtual team be assigned full-time to the team.  A few members of the team whose services are only needed occasionally or only at certain defined times in the life of the project, may be assigned to 2-3 cross-functional teams.  For example, if a marketing team occasionally needs the service of an expert in audience management or personalization, those people may be assigned fractionally to the team.  However, best practice is to train one or more members of the team in audience management or personalization so that they can do 80% of the work to be done, with only the most difficult parts needing the assistance of an expert.

What AFLAC’s Duck Teaches Us About Agile Marketing