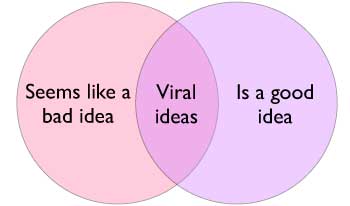 What if you could create a new piece of marketing for your business that went viral? That would be great, right? Unfortunately, there is no magic formula that will reliably create viral ideas. However, there are a few techniques that increase the likelihood that you’ll be able to break out of the mold and generate ideas that are different and interesting, and if you’re lucky, go viral.

Paul Graham, one of the deans of the startup world and one of the founders of Y-Combinator, recently wrote an article titled “Black Swan Farming” that has itself gone viral in the startup community. In it, he describes a diagram drawn by Peter Thiel at a Y-Combinator event, where he drew two intersecting circles, one labeled “seems like a bad idea” and the other labeled “is a good idea”. The intersection of these two circles, ideas that seem like a bad idea but are in reality a good idea, is where the best startups come from.

This idea can also be applied to marketing. When Steve Jobs and Apple launched the Apple Macintosh in 1984, it might have seemed like a bad idea to poke a needle in the eye of their much larger competitor IBM (and in fact, Apple’s board got cold feet at the last moment and almost cancelled the ad), but in fact, it was a good idea. When every other beer brand was going after a younger crowd, it may have looked like a bad idea to cast a 70-year old man as your spokesperson, but for Dos Equis and their Most Interesting Man in the World campaign, it was a good idea that almost immediately led to a 15% increase in sales. I’m sure more than a few people thought that the Las Vegas promotion “What happens here, stays here” was a bad idea, but it works for Sin City.

How You Can Use This Idea to Create Viral Ideas

Brainstorm with your group for 15-20 minutes, listing as many “bad” ideas as you can for marketing your product or service. Have fun with it. Come up with some real stinkers. Once you have a good list, go back over it, and see if on second look some of the ideas aren’t in fact good ideas, or perhaps one of the bad ideas inspires a good idea.

One of the things I learned (or honed, I’m not sure) at Microsoft was how to think on my feet. In particular, a classic Microsoft skill was (and I assume still is) the ability to judge ideas as good or bad in a meeting. Unfortunately, this skill didn’t serve me well outside of Microsoft, and I’ve had to learn new behaviors. A coach once encouraged me, when I’m presented with a new idea, no matter how good or bad I think it is, to ask questions. If you judge someone’s idea almost immediately, it has two negative outcomes. First, the person doesn’t feel heard. They don’t feel that their idea got a fair hearing. Second, you miss those ideas that on first glance seem like bad ideas, but in reality, are good ideas. Either by looking at the idea from a slightly different point of view, or tweaking the original idea, what seemed like a bad idea becomes a great idea.

How You Can Use This Idea to Create Viral Ideas

The next time you hear an idea that you think is truly a bad, horrible, no good idea, ask a question about the idea before you judge it. The question has to be an honest one; you can’t fake this. If nothing else, say “tell me more” or “elaborate on that”. And be open. I’ve found that about half the ideas that I thought initially were bad ideas, I could genuinely embrace, once I either understood them better, or I suggested a small tweak that built on the idea.

What’s your experience? What’s the worst idea you ever had that turned out to be a great idea?