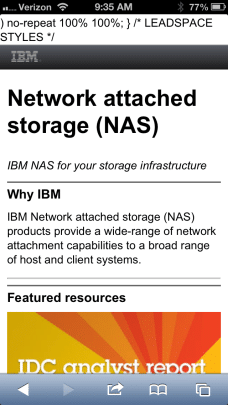 Mary Meeker’s annual State of the Internet presentation should be required reading for every marketer. She recently published, and I recently read, an update to her 2012 presentation. I was particularly struck by her data on the momentum of mobile adoption. Global unit shipments of smartphones and tablets (what I’ll call mobile devices) surpassed global unit shipments of desktop PCs and Notebook PCs in the 4th quarter of 2010. In 2013, her estimates show almost 3 times as many mobile devices shipping globally compared to PCs (slide 25). The global smartphone and tablet installed base should exceed that of PCs in the 2nd quarter of 2013 (slide 26). Mobile now accounts for 13% of total Internet traffic (slide 15) and in some countries, like India, mobile traffic has now surpassed desktop traffic (slide 16).

Retailers and B2C marketers are certainly aware of this. Nearly one fourth of Black Friday Internet shopping traffic came from mobile devices. And many, if not most, retailers have created mobile sites and mobile applications to make it easier for mobile users to get what they want from their mobile devices.

But what about B2B marketers? Do they need to be prepared for this mobile device trend? I think the answer is yes, and at the present, I think that most B2B marketers are woefully underprepared.

The Case for Mobile in B2B

All of those smartphones and tablets are being used for more than comparison shopping while in BestBuy or surfing the web while watching TV. People are bringing their devices to work, or in some cases, using corporate-issued mobile devices to get work done.  Forrester’s latest data shows 12% of employees using tablets at work, with 66% of employees using 2 or more devices (mostly a desktop and a smartphone). Employees use mobile devices for browsing, email and working remotely. It seems clear that as B2B marketers, we can’t ignore the mobile device trend.

Most complex B2B sales require an internal champion, and approval by multiple parts of the organization. Imagine that your internal champion is in a meeting seeking final approval for your solution. He’s asked a question which for which he doesn’t have an answer, but he has his iPad with him. He tries to look up the answer on his smartphone, but the web site, which was created for a desktop, is so difficult to navigate that he gives up and says “I’ll get back to you on that”. Fail!

Are B2B Marketers Ready for Mobile?

The short answer is no. I took a look at some of the largest companies on the Fortune 500 list that sell primarily to other businesses, companies like General Electric, Hewlett-Packard, IBM, Microsoft, Boeing and others. I also looked at marketing automation vendors – companies like HubSpot, Marketo, Eloqua and InfusionSoft. Only Intel and HubSpot were prepared for mobile users. Many of them did not have a mobile specific version of their site. Go to Boeing’s web site or InfusionSoft’s, and you’ll see the same site you see from your desktop. You won’t be able to read it from the smaller screen of your smartphone, and you’ll have to zoom in and out constantly in order to navigate and read their site. Microsoft’s front page and some parts of their web site were optimized for mobile, but other parts (Tools and Server group, for example) were not. IBM’s site had visible HTML errors on their site when accessed by my iPhone. This is pitiful. Only HubSpot recognized that I was accessing their site from a mobile device, and encouraged me to download their IOS app.

Actions You Should Take

First, make sure that you have a mobile specific version of your site, particularly for smartphones. The screen on most tablets is large enough to accomodate most web sites, but certain technologies either don’t work on the iPad or can’t be counted on. The most well known technology that many web sites depend on is Adobe Flash. There are some independent solutions, but you can’t count on Flash being on the iPad.

Second, talk to both your customers and prospects about how they might access and use information on your web site from their mobile devices. Build personas separately for existing customers versus prospects, and make sure that your mobile web site makes it easy to find and retrieve the kind of information mobile users are likely to want to retrieve.

Third, consider building an application for at least IOS and Android, and when customers access your site from either of those two operating systems, offer them the application. The app offered by HubSpot, the only vendor I looked at that offered an app, isn’t very rich, but the fact that they offered one this early in the game impressed me.

If you have an example of an excellent B2B mobile web site, particularly one that has a complimentary app, let me know in the comments.