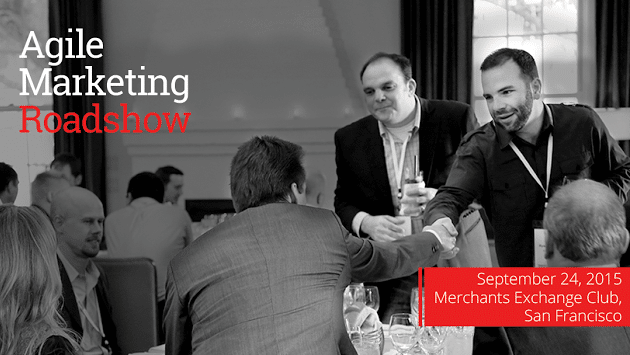 I was at an event in San Francisco last night put on by VentureBeat, and one of the panelists made a comment that I feel compels a response. Hiten Shah, one of the co-founders of Crazy Egg, KissMetrics and QuickSprout, and a very smart guy, said that he thought the term Agile Marketing would go away, because, he argued, all marketing would be agile.  Market Darwinism will simply eliminate marketers who aren’t agile, and so we will just say Marketing, rather than Agile Marketing.

This is a very smart approach to take at a panel, as it immediately raises the hackles of some of us who’ve invested a lot of time and energy in Agile Marketing, and every audience likes a good fight.  I suspect Hiten knows this, although he makes a valid point. If all marketing is agile, do we need to use the term? I think we do, particularly at this stage of its adoption curve, and I also think Agile Marketing is here to stay, just as Agile Software development is here to stay.

Google Trends is one of my favorite tools.  It can tell you about the rise and fall of a search term over time, which in many ways is a good proxy for the mindshare or the popularity of a term. I’ve used it to research hundreds of terms over the years. You can also compare the popularity of multiple terms.

Here is what Google Trends says about the rise of the term Agile Software Development, and how it compares to the term Waterfall Model, the model that it supplanted. As you can see, Agile Software Development continues to grow, although much more slowly than it (apparently0 did in the years immediately after the Agile Manifesto was signed in 2001. Unfortunately, Google Trends data doesn’t go back before 2004, so we can just see the tail end of that rapid growth. And the term Waterfall model continues to decline, although slowly. 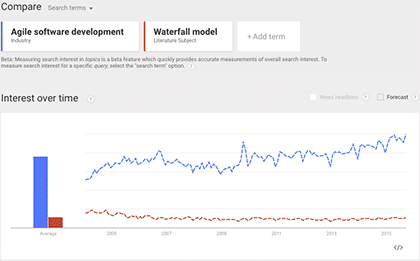 The surprise comes when you put in the term Software Development. By Hiten’s logic, since almost everyone is now practicing Agile software development, we should start assuming the term.  Apparently, we don’t. 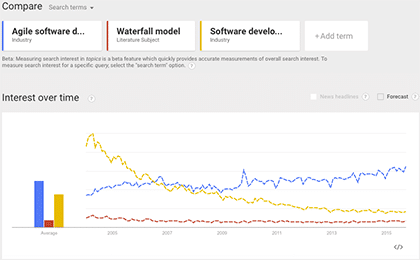 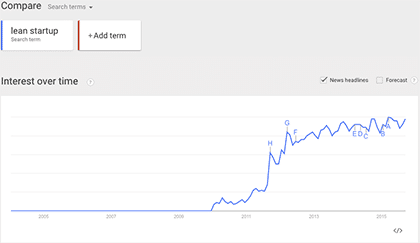 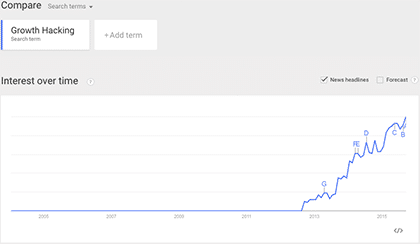 OK, I can see the argument that Lean Startup has plateaued, but I don’t see it declining, and growth hacking continues to show robust growth. In both cases, there are some important concepts that continue to have tremendous impact on how entrepreneurs grow startups.

What about the term Agile Marketing? How is it trending according to Google? 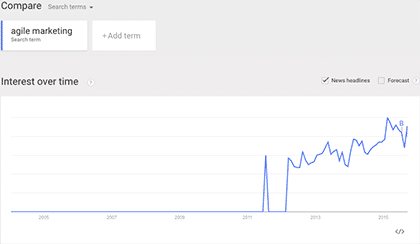 There’s growth there, but it’s uneven.  I have no idea what happened in July of 2011 that searches for the term spiked, but my guess is that for the remainder of 2011 and into early 2012, there weren’t enough searches for Google to track on Google trends.  Since then, the growth has been generally up, but it’s been anything but steady, even declining a bit from April to August of this year. However, in September, which isn’t over yet, searches popped up again.  And I can say from the experience of my own blog, traffic in the past 30 days is up 39% compared to the previous 30 day period.

Beyond the trends in searches and blog traffic, I think there are two key reasons why Agile Marketing, both the term and the practice, are here to stay.

The first reason is the pace of change. Each year, Google changes its search algorithm 500-600 times. Although most of these are minor, some of them are major, and can greatly impact traffic at any site that’s dependent on organic search. The impact of all of the various social media channels, the impact of marketing technology, the 24 hour news cycle. The fragmentation of markets.

None of this is going to change, and marketers need some way to control this firehose. Whether your answer is Scrum or Kanban or simply a group version of Getting Things Done, marketers need some central way to receive all the requests for work, prioritize them, and get them done in a timely fashion.

The second reason is our increasingly improved ability to measure the impact of marketing, and to iterate and experiment until we get it right. Marketing is no longer solely the provence of the Don Draper/Draper Daniels creative genius who launched a big campaign, and it either worked or it flopped. Today, in addition to creatives (which we’ll always need), we also have data scientists who can tell us which version worked and which didn’t. Marketing has to change in response to this – it has to become more iterative, more experimental and more data driven.  Call this growth hacking, data driven marketing or agile marketing, but it’s here to stay.

What do you think?